This painting was done for Enchanted Visions which I was recently invited to participate in. Enchanted Visions was started Amy Brown and Jessica Galbreth  who  both agreed on a title for an image and then created their own interpretation of that title, not seeing the other’s work until done.  Coriander Shea Detwiler contacted the two artists and asked if other artists could also participate.

Amy and Jessica graciously accepted the request, and Coriander set about finding and inviting like minded artists, which is how I became involved. The theme chosen for March was a “A Dark Current”.

My idea from the start was to paint a mermaid underwater. What switched in the process was the concept for how I would paint it. I first pictured very dark blue and purple water. But after thinking about it a while I decided to make it about the mood of the mermaid, to invite the viewer to wonder what the mermaid was thinking about; what she was feeling.

I started with a warm blue wash. Since this would be a painting of a mermaid underwater I wanted her skin tone to have a blue cast to it. It’s very easy to get muddy tones when using a blue undercoat, because the pinks and reds of the skin tone can combine with the blue in ways that can be less pleasant because of the transparency of watercolor. 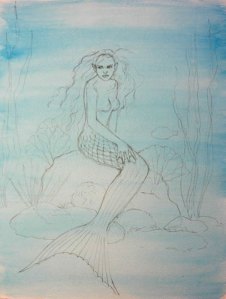 Next I sketched in my mermaid sitting on a rock, giving her webbed hands.  I only drew in one fish, because I didn’t want a lot of activity around her to enhance  her isolation.

Already she has the beginnings of a dark expression. 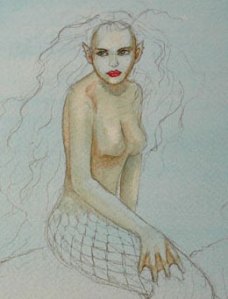 Next I started painting the skin tones using raw umber with a touch of Quindacrone Coral (Daniel Smith).  It was important to leave the blue undercoat unpainted in areas where there would be shadow or reflected light.  Using the same coral I painted in her lips, and gave a warm blush to her cheeks.   Her eyes were defined with sepia and Thalo Turquoise.

Taking ultramarine and manganese blues I started painting in the water. Ultramarine for the water closest to the bottom and manganese for the water closer to the surface.  Ultramarine is a cooler blue and is a good choice for the deep water that is further from the surface light and therefor less warm in color.  Taking the same shades I painted the tail in.  Using the cooler toned ultramarine for shadows and the warmer manganese for highlights.   With both the water and the tail I went back several times gradually building up the color. When I was a beginner one of the mistakes I would make was putting paint on the paper at near full pigment strength.  This tends to make the colors dull. One of  the most important characteristics of watercolor is it’s transparency. The white paper underneath is what gives it it’s glow.  If you add color too fast you lose the transparency needed for the white to show through. 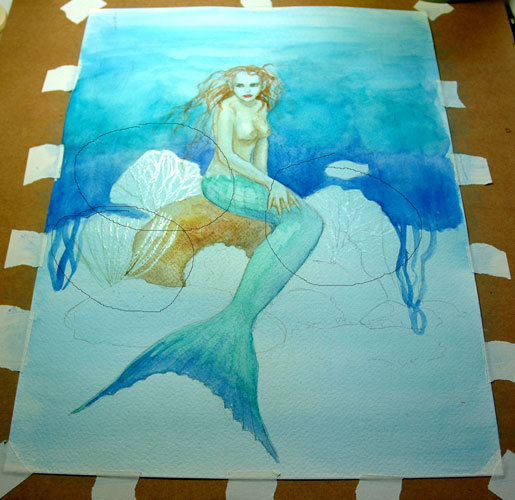 At this point I needed to use masking fluid on some of coral. You can see where I’ve circled some areas a shininess. That’s the mask. You use a mask when you need to wash in an are with color that and you have delicate areas that take too long to paint around.   When you have to take that time, your paint edges start to dry and you will get rings. Not an effect that you are shooting for.  So use masking fluid.

Now the fun starts.  I’ve now laid in all the color wash layers of the water and I’m ready to paint the sea weed. For the I used jadedite green (Daniel Smith).  For the rock she’s sitting on I used burnt umber, burnt sienna , and Van Dyck brown. In the shadow I added some of the manganese blue to cool it and because it added a bit of the local color from her tail. Light reflects color from one adjacent thing to another. I used the same colors on the rock below her and used cadmium red deep for the coral.  Lighter washes for the highlights and stronger washes for the shadows.   In the background of the water I took a slightly damp brush and lightly scrubbed out lines to indicate places where the sunlight penetrated to the ocean floor, and added some very pale blue  green seaweed. 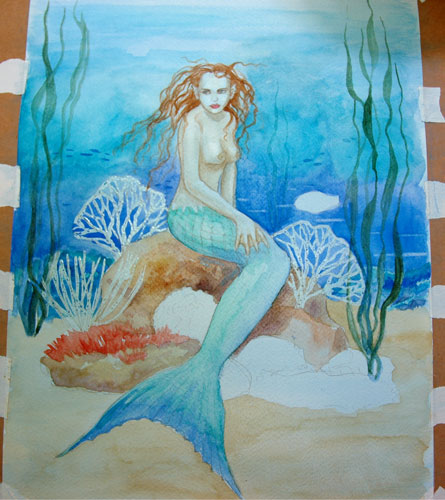 Using a pale wash in that way  makes the seaweed appear further away and like you are viewing it through the density of the water.  And then I added a light wash of yellow ochre for the sand. I added some fish with cobalt blue.  The rocks behind the seaweed on the right were painted using the same blues that I used on the water but in stronger tints, using the same idea of cool blue for the shadows and warm blues for the highlights.  So using predominantly warm colors in the background and warm colors in the foreground gives the illusion of depth and dimension.  So just to recap cool makes things recede and warm pushes things forward.  Things seen through an atmosphere, whether water or air,  will always get bluer and have less value.  This rule and good perspective will give a painting its depth. In this photo I had already started drawing in the scales on her tail.

Next I  started adding more details.  On the rocks this included shadows using carbazole violet (DS) and creating more texture and patterns with the same colors I used earlier (burnt umber, burnt sienna , and Van Dyck brown).  I painted black sea urchins on the rocks. For the brain coral I used buff titanium (DS), raw umber, and violet in the shadows.  At this point I worked a bit more on her face to define it more with shadows.  I darkened the shadows on her tail and started painting in the scales that I had drawn in earlier. Also using shades of blue to define the bottom of her tail.  I added even more shadowing to the big rock- both under her tail and on the side,  and the bottom rocks. 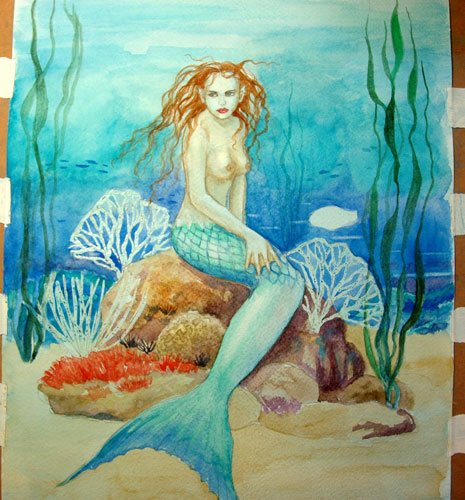 Next I pulled off the masking and painted the coral in shades of magenta, and the other sea plant (sorry I don’t know its name) with cadmium orange. I used I used thio violet on the coral on the bottom right and varying shades of blue in the shadows of the sand. I then went back and added more shadow to define her skin even further. I added more coral to her cheeks. I then added permanent rose to the lowest water areas  and painted in the fish.  That ‘s pretty much it for “A Dark Current”. 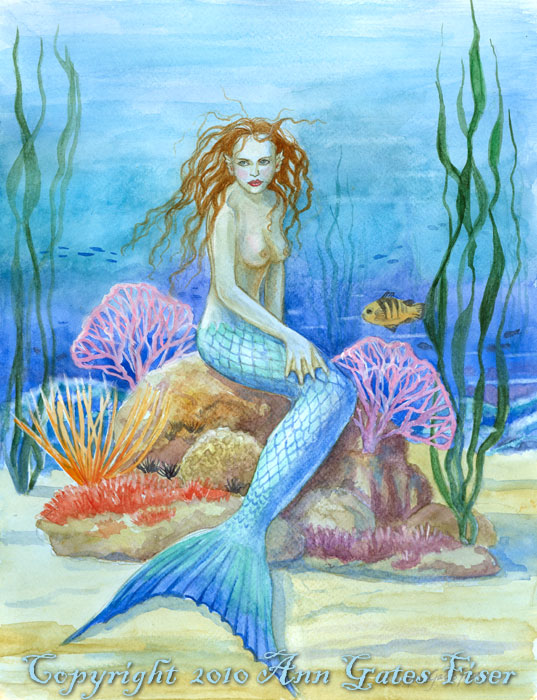 Chasing big dreams one photo at a time

About the Fantasy Worlds of Lita Burke

where would-be writer works with words

Valkyrie Of the Stars

Cool stuff for all Valkyries at heart

Ladies dressing to get the job done. Updates most weekends.

Middle England Earth Art
Breaking Out of the Box

My own personal art therapy journal

Badger the Gnome ~ Words from Rachel Marsh
Read Between the Minds

Home on the Grange

Making beautiful marks on my world

I am a mermaid

A delicate, ladylike blog for mermaids and the humans who love them